Some writing that’s so good it made me cry 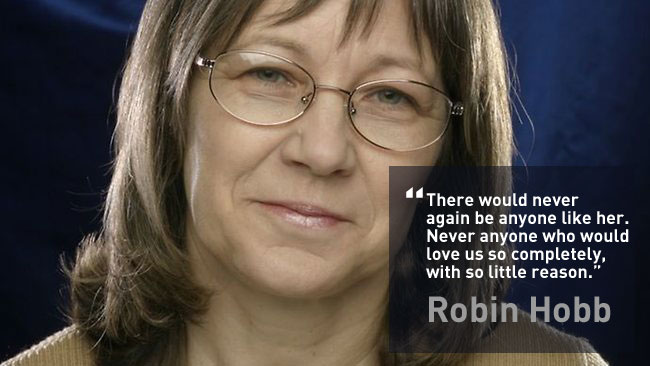 This post isn’t about copywriting. (Although I think the authors below would probably make great copywriters.)

It’s a celebration of some amazing fiction writing. Some of it so good it made me cry.

If you like this sort of stuff, make sure you join my Writers’ Writers community on Google+, a place where we talk about writing you wish you’d written.

Robin Hobb (pictured above) wrote one of my favourite fantasy series: The Farseer Trilogy.  She’s since followed it up with two more trilogies featuring the same main characters: the Tawny Man series and The Fitz and The Fool Trilogy.

My first quote is from book 1 of this last series: Fool’s Assassin. (If you like it, I’d recommend you start right back at book 1 of the Farseer Trilogy, Assassin’s Apprentice.)

I really relate to one of the characters in this book, and his relationship with his wife. Sadly his wife died. These passages were the highlights of a whole sequence of pages that made me cry as I read.

The first was written from their daughter’s perspective, describing how her dad responded when he discovered his wife had died:

“He came to the wooden gate in the low stone wall that surrounded the garden, looked in at us, and knew. He knew she was dead before he opened the gate. Still he ran to us, as if he could run back to a time when it wasn’t already too late… He gathered us both up to him, threw back his head, and howled. His jaws stretched wide, his face turned up to the sky and the ridges of muscle in his neck stood out. He made no sound. Yet the grief that poured through him and up to the sky soaked me and choked me.”

The next  was also from the daughter’s perspective, reflecting on her loss:

“There would never again be anyone like her. Never anyone who would love us so completely, with so little reason.”

And the last is from the husband’s perspective, describing his grief:

“There are endings. There are beginnings. Sometimes they coincide, with the ending of one thing marking the beginning of another. But sometimes there is simply a long space after an ending, a time when it seems everything has ended and nothing else can ever begin. When my wife, the keeper of my heart since I was a boy, died it was like that. She ended, but nothing else began. There was nothing to take my mind from that void, nothing to redeem my pain, nothing that made sense of her death. Instead, her death made every other ending I had ever known a fresh wound… Burying her was hard for me. It would have been easier for me to watch her burn on a pyre, to know she was gone, gone completely and untouchable than for me to think of her wrapped only in a shroud and put under the weight of damp soil. Day after day I went back to her grave, wishing that I had touched her cheek one more time before they put her into the dark earth.”

(Note, the character actually names his wife in this passage, but I changed it to “wife” to reduce spoilage.)

The thought of ever losing my beautiful wife really made these passages resonate with me.

Brandon Sanderson on ‘a woman’s place’

“What is a woman’s place in this modern world?… I rebel against this question, though so many of my peers ask it. The inherent bias in the inquiry seems invisible to so many of them. They consider themselves progressive because they are willing to challenge many of the assumptions of the past. They ignore the greater assumption—that a “place” for women must be defined and set forth to begin with. Half of the population must somehow be reduced to the role arrived at by a single conversation. No matter how broad that role is, it will be—by nature—a reduction from the infinite variety that is womanhood.”

I know it’s not the first time these analogies has been used, but Sullivan’s really jumped out at me. Perhaps because of their simplicity and certainty. The first is a discussion of love in Rise of Empire

“Have you ever been in love, Hadrian?”

The second is a discussion of money in The Crown Tower:

“Everything else runs downhill—but gold flows up.”

Anne Tyler has a way of capturing the beauty and sadness in the everyday. Here are 2 quotes from The Beginner’s Goodbye, a book about a man whose wife dies.

“That was one of the worst things about losing your wife, I found: your wife is the very person you want to discuss it all with.”

The second really rings true for me, after losing my dad 2 years ago…

“…it’s like the grief has been covered over with some kind of blanket. It’s still there, but the sharpest edges are … muffled, sort of. Then, every now and then, I lift a corner of the blanket, just to check, and—whoa! Like a knife! I’m not sure that will ever change.”

Again, I know the premise here isn’t new or profound, but Abercrombie captures the melancholy of aging vividly in Red Country. It really rang true for me.

” ‘The best grass is always just past the horizon. The sweetest water’s in the next river. The bluest sky over some other mountain.’ He gave a long sigh. ‘Afore you know it, your joints snap of a morning and you can’t sleep two hours together without needing to piss and of a sudden you realise your best country’s all behind you, never even appreciated as you passed it by, eyes fixed ahead.’

‘Summers past love company,’ mused Lamb, scratching at the star-shaped scar on his stubbled cheek. ‘Seems every time you turn around there’s more o’ the bastards at your back.’

‘Comes to be everything reminds you of something past. Somewhere past. Someone. Yourself, maybe, how you were. The now gets fainter and the past more and more real. The future worn down to but a stub.’ “

He also does a good job of capturing the elusive nature of fun:

“But she’d always found fun was easier talked of and looked forward to than actually had.”

The reality of fighting:

“However fast, however strong, however fearsome you make yourself, there’s always someone faster, stronger, more fearsome, and the more you fight the sooner you’ll meet him.”

And the true definition of righteousness:

“…you know the righteous by what they give to those who can’t give back.”

Just as importantly, Abercrombie often makes me laugh. In the same book, he describes an underwhelming gold-rush:

“It appeared the amount of gold in Crease had been drastically over-stated, but no one could deny there had been a mud strike here of epic proportions.”

“There was dancing. Or at least well-meaning clomping in the presence of music if not directly related to it.”

In Half a King, he talks about tolerance:

” ‘Don’t lean too much on my good nature, boy.’ Trigg’s good nature did indeed seem too weak a thing to bear much weight.”

in Best Served Cold, he talks about fools:

And storming the walls:

” There were a few grunts, some calls of ‘steady’ and the rest, but a quiet rush, on the whole. It wouldn’t have seemed right, really, giving your war cry while you ran at a wall. What do you do when you get there? You can’t keep shouting all the way up a ladder.”

And in Before They Are Hanged, he talks about cleverness:

” ‘Don’t try to be clever with me, Captain Luthar, you have not the equipment.”

And about willingly associating with the wrong women:

” The women of his acquaintance rarely said anything clever, especially the fine-looking ones. He supposed they were trained to smile and nod and listen while the men did the talking. On the whole he agreed with that way of doing things.”

I had some song lyrics lined up as well, but I’ve run out of time. I suspect you should be doing something more productive too!

So I’ll just leave it here. Hope you enjoyed.